Rotterdam protest: In Solidarity with People in Iran

On the 2nd of October, protestors came together in Rotterdam to stand in solidarity with people in Iran. This text is Suzan Karimi’s speech, delivered for people in Iran, marginalized women, and LGBTI communities all around the world. 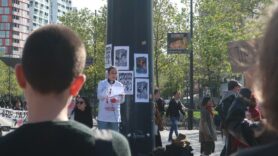 It’s a day now since we arrived in the month of October. A month well known for a revolution that broke out in early 20th century Russia but changed the whole world order forever. No, don’t get me wrong. I don’t intend to speak of any attachment to the Bolshevik Revolution of 1917 or to any other nostalgia for the past. Not only did that event somehow end up with the emergence of the current cruel mafia state in Russia, but, in general, the traces of Patriarchy are evident in most historical occasions behind us. My intention here is something else.

When that revolution occurred, it shocked many observers that a theory developed and endorsed in more progressive countries actually materialized in a society that they didn’t even consider. And now look at Iran! For a long, Iranian women have suffered severe domestic repression and have been excluded from international power games. But now it is these same women who are bringing about something which we may call the first feminist revolution in entire history. This revolution, too, will affect the world order; as we can see, it’s already been impacted greatly.

But this feminist fight did not begin only recently. It dates back to the very early days of contemporary Iran, and it’s been present in all the efforts toward equality and freedom but was co-opted by the patriarchal system at almost all critical points. Even today, individuals among the political forces refuse to acknowledge the central role of women’s rights activists and gender equality discourse in this movement by insisting that everyone is working together here. True, but it’s undeniable that it was state femicide that ignited the revolution. It was courageous feminist journalists -now in prison- who revealed the truth about the murder of Jina. It was the mourning Kurdish women who removed their scarves and shook them in the air at Jina’s funeral, and then it was Iranian feminists who called everyone to the streets. We will never let their role be forgotten, not again. We have come such a long way. We’ve reached a point where instead of self-immolation and self-annihilation, we are burning the signs of our submission, the signs of our silence. And all around the world, we chant a slogan originally put into words by Kurdish women fighters:

It wasn’t the first time a tragedy had happened through the suppression of a ‘forbidden’ body. The murder of Jina took place within a long history of state femicide and honor killing, countless heartbreaking instances, the sorrow of which has never left the hearts of Iranians. Likewise, the question of the Hijab has been a pivotal point in women’s struggles since 1979, the very first days after the last revolution. Those women realized, sooner than many of their comrades and their descendants, that the forced Hijab is not just a compulsory style of clothing; its main purpose is to discipline and dominate the body. Right after dictating the forced Hijab, the Islamic Republic implemented a set of rules to subjugate women and sexual minorities, which have exerted a large negative impact on the entire society. Among those rules are:

As I said, this set of rules from the Islamic Republic has led to intensified gender division, violence, and the monopolization of power. Everyone has somehow been damaged by these, even cis men themselves. To be able to express collective joy or to experience basic individual, political and social freedom has become a great wish for all people of Iran. That’s why the masses could engage in this movement and find their individual wills expressed within the beautiful slogan, ‘Zan Zendegi Azadi’. These people have had enough of patriarchal domination, enough of the presence of death in their daily lives, and enough of subjection to a patriarchal theocracy ruling their country. People have had enough of what has been there and now long for a new kind of order.

So it’s no surprise that this slogan has become a pivotal point for transnational solidarity especially among our Afghan, Turk and Arab sisters, as our futures are greatly intertwined. It is no surprise that this revolution has inspired enthusiasm among people in different nations as much as it has horrified different patriarchal governments, whether western fascist or fanatic fundamentalist middle eastern. Just yesterday in Kabul, they blew up a girl’s school and made us suffer not just from the killings in Iran but also by the murder of dozens of our young Afghan sisters who merely wanted a chance to live and get proper education. And now here we are, at this moment, with our geographic and linguistic diversity, we chant this collective will: