After three days of Mahsa Amini being arrested and murdered under custody during hijab inspection by operating under the paramilitary militia Besic which is called Irshad Patrol – known as moral police – on the 14th of September, the protests began with mourn and rage of Iranian women had spread to eighty towns and cities around the country. In Sakkız, a state of Kurdistan, the body of Amini is put to rest with “Jin, Jiyan, Azadi” slogans.

Seventeen people were killed due to the fire opened on protesters by the Revolutionary Guards and the number is counting. Meanwhile, The President of Iran, Ibrahim Reisi was saying the actions of protestors are unacceptable; in a statement of Tehran, it was said that Amini was transferred to hospital due to a heart ailment in detention. Her autopsy report was not shown to her family. President Reisi’s speech included the statement “hypocrisy of West,” which is what feminist and LGBTI+ activists living in Turkey are accustomed to hearing. The announcement that the military will support the moral police shows us that the freedom of a woman’s body can be seen as a great threat to the regime itself.

Whatever kind of political regime, in the type of society that is focused on the female body as the producer of the generation, a female body is always seen as a field that has different kinds of moral values on it. Historical examples such as The Lebensborns created by the Third Reich or the popularization of modern clothing instead of using hijab and the inclusion of women in education life, a few of the revolutions of The Republic of Turkey, show us that the female body was set up as a ring for political regimes.

The struggle at the forefront in Iran is exactly about this “show ring.” Although the adhibition of Islamic law and the instructions given in The Koran have been opened to discussion and interpretation by Muslim feminist theologians, the common ground for all the different variations of the ongoing methods of adhibiting Islamic law is still the female body. Like the social movement against “female genital mutilation” in African Muslim societies.

One of the main reasons why the body perception in the East is constructed differently from that in the West may be that the idea of individuality, which emerged in the West after the Renaissance and Reformation, has evolved up till today. In eastern societies, women are still perceived as an entity associated with family and family values. From this point of view, it should not be seen as baseless and meaningless that Eastern politicians describe this struggle as harmful, imported, contrary to social values, and “the game of the West” and tried to build the front line of struggle with this discourse. But being meaningful should not give the impression that the opposing struggle is on the fair side.

In societies where the family is institutionalized as a basic value, seeing the woman as individual, own and immanent entity is a thesis that pushes the ideal boundaries of normativity. Therefore a piece of cloth on the female body often symbolizes the moral and sexual values of society. Acceptable women should be kept out of the way of strangers and the eyes of men, and in places where they are supposed to be together with the opposite sex, they are encouraged and even required, as in Iran, to use fabrics to symbolize their acceptableness.

In addition, “the correct use” of these fabrics also varies. Women from Turkey will remember the words of the state representatives on how the “incentive” work progressed.

“A woman without a headscarf looks like a home without a curtain.”

“Men and women can not be equal; it is against nature.”

“If a woman works, that means she is getting ready for prostitution.”

“A laughing woman is immoral.”

“A woman who got raped should not get an abortion care.”

“Pregnant women can not walk around with everyone.”

“One and only career for a woman is motherhood.”

“Turkish woman is the ornament of her home.”

The similarities in state discourse can be seen in the government order on the 7th of March in 1979 in Iran; “Women without hijab have to be seen like naked.” 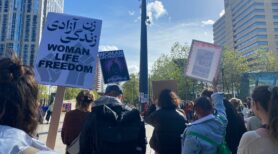 At this point, “the personal is political,” which constitutes the main motto of feminism. While seeking the answer to the question of how the expression can be seen as a common axis of the struggle for both Eastern and Western women, we should keep in mind that we need to go deeper into the mystical view of the East in Western minds. A united struggle that will be constructed without considering the idea of Orientalism will not go beyond being a fantasy. Orientalism is a compromise with the East. The East is not only adjacent to Europe; it is also the site of Europe’s largest, richest and oldest colonies (Said 1978). The colonialist Orientalist perspective is the source of the West’s continuing undertaking attitude towards the East and “the cultural hegemony anxiety” of the East against the West. Today, one of the reasons for the anti-Western attitude in the discourse and actions of Iran, Iraq, Afghanistan, Palestine, Algeria, Egypt, Jordan, Syria Muslims, and fundamentalist groups is closely related to the trauma of colonialism and the West’s undertaking perspective.

In terms of women’s struggle, as a Kurdish-origin Turkish feminist, I can identify myself with the vital struggle in the East rather than the women’s movement in the West. On the surface, this identification can be seen as an inherently emotional connection.  However, when I think about the juxtaposition of Western and Eastern feminist struggles, I realize that the Western struggle emerges from the civil rights movement, expanding towards academic debates rather than being the resistance to staying alive.

This difference and the weight of the struggle in the East leads me to look from a purely Eastern standpoint. The women’s struggle in the East grows exponentially on women’s shoulders with the weight of the ones whose lives are ended due to the appearance of their hair, bodies, and even their eyes. Women in the East carry their comrades’ dead bodies on their shoulders. The common grief functions as an empowering tool and mobilizes women to be more refractory. Thus, their life struggle encompasses more vitality than the workshops and commissions established by men and academic chairs.

There has to be a feminism that responds to our needs, where we can embrace each other. We need to create a commonality where we are not hearing words spoken with authority, not undertaker, not confined to the scale of religion or color, where each of us can politicize our selfhood and feel alongside women from all over the world.

We will be judged for being judgmental while making feminism a vital question. Living a feminist life turns everything questionable (Ahmed 2017). Feminism must be everywhere, where it has to be.

A picture that is used on social media about Amini, reminds us one more time that feminism is a vital struggle and it should continue lifelong. The picture of black hair waving in the wind, a visual design created in memory of colonized and enslaved Africans, should make us think about both the idea of its origin and semantic shift. The unintended partnership should be able to show the vital reality of being together to women and men, eastern and western, young and old, feminists and non-feminists who read this.

Setting the hijab on fire and cutting hair cause threats to the state, thus the Iranian government blocks social media channels and initiates military forces on the streets. This tells us the feminist movement has the power to unsettle the normativity enforced by the concept of morality.

What we need to do is proudly go with the voice rising from the far end of the world by coming out of the sheltered systems – which are often the systems that are created despite our existence and in opposition – without a “but” unconditionally diversify and raise that voice with all the power given by solidarity.

Despite all the intimidation, detention, loss, and killing policies of the governments, we can strengthen our existence by prioritizing stubbornness and plural voice. Despite the increasing pressure and punishment of the 20-year-old government in Turkey, women and LGBTI+ are the only social groups that have been able to take the struggle to the streets on the same day for 20 years. Because of this stubbornness, it is these unacceptable groups that are the most demonized and stigmatized, like Iranian women who disobey fatwas and decrees. We must keep insisting on being on the streets. Cutting hair, showing off Afro hair with its all volume, laughing loudly, dancing and singing, and even speaking the mother tongue are political. Our existence is political. We can nurture and feed the politics of our own being with women on the other side of the world. We can hear the slogan “Women, Life, Freedom” in a language we do not know from our own voices. When the wind blows our hair, we can continue the struggle of Mahsa Amini, whose body was tortured because her hair was visible.

And if somebody hurts you I wanna fight

But my hands been broken one many times

Words, they always win, but I know I will lose

And I would sing a song, that would be just ours.

No achievement is permanent, especially as long as the female body continues to be a podium in the political arena, because parallel to the change in the ruling ideology, the potential for domination over the body will also change. The fact that, after the overthrow of Shah Pahlavi in Iran and the establishment of the Islamic Republic, the change in the regulations of women’s dressing, presence in public, and their civil rights, or the operation of sharia law in the regions acquired by the fundamentalist ISIS formation that emerged during Syrian War, or recently in Afghanistan, one of the first regulations made by Taliban who regained power in the war, consisted of regulations on how and in what way women should exist in public, is enough proof that the women’s movement should be a constant struggle.

Although not as severe as in Iran, Iraq, and Afghanistan, the change in Turkish politics inevitably primarily affects women and LGBTI+. The government, which set out with the idea of moderate Islam, reveals an understanding of Islam that has become more and more rigid in the twenty-year period of administration. The Istanbul Convention, which was opened for signature on May 11th in 2011, was signed by Turkey on the same date. The same government decided to withdraw from the convention in 2021. Among the reasons for unilateral termination, they scattered discourses that the convention disrupts “acceptable” women’s existence and family unity as political and religious references such as “insulting family values,” “cultural hegemony, and game of the West,” which we are very familiar with. After the emphasis on the sanctity of obedience and family unity, the daily exposure to the aggressive and rude definitions of LGBTI+ groups as a perversion, and the slow boiling of water, the phase of withdrawing from the convention was completed.

All these examples show that continuous and cooperative struggle is not a choice but a prerequisite for having our own lives. For a united struggle, it seems important to create international communities that we can be involved in and multinational media outlets to create accessibility and opportunities for women in different countries to listen, watch and read their own voices, despite local media built with the language of local administration power.

I need to thank my friends Jülide and Defne with all my heart, who created and opened Unsettling Pieces as a platform where we can express ourselves freely. After these precious two women, I have to thank Utrecht University-The Center of Digital Humanities for creating the base of solidarity.

I want to conclude by giving an echo to Angela Davis: “Freedom is a constant struggle.”